Shanti Life and the empowerment of slum communities in India

Microfinance is a financial service that has changed the lives of many people in the past few decades. Combine this with the empowerment of women and you have yourself a powerful means to alleviate poverty in slums. It is time for skeptics to take a step back.

Shanti Life, founded by Sheetal Mehta Walsh in 2009, is a nonprofit organization that uses microfinance to address poverty in Gujarat, including a number of urban slums. By giving slums dwellers low-interest micro loans and training, Shanti aims to promote and mentor sustainable small business in the local communities.

Sheetal Walsh at the home of community leaders in village Surendranager.

As outsiders working on the ground, it was easy for us to recognize the importance of microloans to the lives of several households in Vatva, one of the slums where Shanti is active.

It is difficult to imagine the life of slums dweller comfortably sit on our sofa. Their house may be just one small room in which five or more people stay. There is virtually no sanitation, unreliable electricity and no fridge to preserve food in. Their income comes from a highly unreliable ‘daily wage’ that can lead to periods of little to no income with which to meet household and other expenses.

Women in Vatva used to stitch clothes manually as a source of income, being able to produce only few pieces of clothes a day bringing in less than 20 rupees a day. Shanti Life’s holistic approach has been to tackle this by helping women not only buy sewing machines through loans, but also to offer training on how to use them.

Yasmin is a mother of three in the community of Vatva. After the purchase of a sewing machine bought through a Shanti Life loans and training, was able to double the amount of clothes she stitched.  With this increase of income she has been able to keep up with her electricity bills and buy a fridge that she uses for a new side business providing milk and biscuits to children in her neighborhood.

Her loan has since being completely repaid is currently being reinvested by Shanti to provide other loans for other women. Yasmin is now one of the leaders of the community and is an example to her children and other women in her community.

Shanti Life’s work has been monitored by people on the ground such as Sanjay Joshi, an expert in the Indian field, who is working to assure that loans are effectively reaching people in need. Having ears on the ground is one of the strengths that assure Shanti’s work makes an impact.

Shanti Life is not only active on the field, but is also working to promote social innovation and young minds. Sheetal’s entrepreneurial spirit leads her and the organization to sustain initiatives that can make a positive difference in the developing world.

Based on the understanding that savings can play a huge role in helping people in the communities where they work, Shanti has decided to partner with Pulse Active Food Savings to help get the project off the ground in association with Sambodh, a woman’s federation in Vatva area.

For more information about Shanti’s work, the team, their multiple programs and everything else catches your curiosity visit Shanti Life website.

At that time I wasn’t imagining that I would end up in Ahmedabad two months later working with some of those amazing change makers.

I’m proud to introduce to you Fehmida and Shezhad, two incredible Indian women that have dedicated all their lives to serve two slum communities in Ahmedabad: Vatva and Sarkej.

Ahmedabad has a very intense history that includes the tragic 2002 riots between Hindu and Muslim communities. This violence had enormous effects on the poorest parts of the city that still exerts an influence in the division between the two communities.

Most residents are refugees from that time and migrants who moved in as they had to leave their traditional homes to make way for major industrial projects like dams.

Fehmida began to work with the refugees of the 2002 riots around that time and has been dedicated to them ever since.

Fehmida Malik in her office in Ahmedabad

Becoming closer to the community and seeing the lack of services and infrastructure that they were facing, she first established the Sambodh Charitable Trust in 2004. Sambodh aims to “educate and empower poor communities by facilitating participatory development processes enabling them to collectively identify, plan, mobilize and manage their development needs and rights.”

Banks are located too far and their system is too expensive and complicated for the residents of these slums. However, having a safe place for their money was a necessity for the many who didn’t have a bank account. To fill this gap Sambodh created a women’s co-operative savings group in 2007.

The Sarijan Mahila Credit Co-operative Society allows women to have a zero balance savings account in which they can deposit a minimum of 50 rupees per month. In this way, women are able to set aside money for health costs, school fees and other emergencies.

Shezhad worked with Fehmida to make the co-operative possible. Introducing such a new idea to women was not easy, as Shezhad told us. She had to fight to gain the trust, not only of the women, the direct receiver of this service, but also of their husbands, that at the beginning didn’t even permit to Shezhad to speak with their wives.

She needed six months to convince the first woman: Sabia. After that the two women together were able to bring on board more and more mothers in their community until they enrolled 2000 women by this year.

“At the beginning I was not even welcome in their houses” Shezhad said, “But now they call me even when they have family problems”. With her charisma and determination she has become an example to the other women.

Shezhad was also the first community member to hear about Pulse. We knew that her approval could lead to its acceptance by the entire community. She listened quietly and at the end she moved her head quickly the way Indians say ‘yes’.

Of course the idea has to be refined based feedback and testing, but Shezhad  found a value in it. That means that we are on the right track.

The idea for Pulse Active Food Savings came from a group of graduate students at Hult International Business School in San Francisco.  It wasn’t pulled out of thin air.  The team of highly educated and experienced young people from five countries (India, South Africa, Nigeria, Canada and Norway) came to it based on their study of emerging trends in technology, development and social enterprise.  It was also based on their collective experience on the ground.

The team and the idea beat out a host of others that competed at the regional Hult Prize competition.  This included those developed by teams from much more prestigious business schools than ours.  Schools like Stanford, Schulich, Warwick, Berkeley, John Hopkins, NYU, and yes, MIT.

The team has also been getting the support and mentorship of a bunch of smart people who know much about development and social enterprise.  It was selected by judges representing IBM, Autodesk, Saachi and Saachi, IDEO and McKinsey. 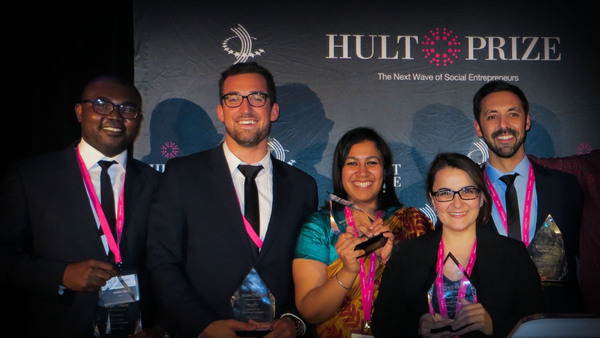 We know that many people don’t have bank accounts, making it difficult to find affordable ways to save money that they can use to plan for the future and face unforeseen challenges.  We know that food security is a serious challenge for many of those same people, taking on many forms.  We also know that the majority of them own or have access to simple mobile phones.  We know that simple SMS technology is being used in different places for amazing things such as community mobilization and supply chain management and health education.

That’s why I feel this pilot is so important.  Tomorrow we will start our phase of intensive interviews and observation to find the ideal Pulse client and to engage them in the design process.  From there we are going to launch a test of the service to prototype the user experience and see what effects the service might have on people’s lives and how it should be refined.

Our challenge in carrying this out is adopt a humble posture of learning that has been coined the beginner’s mind.  This is to “approach a subject with excitement, an open mind, and no preconceptions, regardless of how much knowledge they have gained about a subject.” (source)

Using simple cell phone technology that people can use to save money and boost food security.  It’s a deceptively simple idea that has already generated lots of excitement.

We set up a page on the crowdfunding platform GoFundMe to help translate that excitement into action on the ground.  So far there has been a very encouraging show of support.  Classmates, family members, friends and strangers have been throwing in what they can to make it happen.  Right now we are making one more push so that we can meet the budget on our very lean operation.

If this is an idea you are as excited about as we are, we want to invite you to be a part of it.  Please visit the GoFundMe page for more information on the fun rewards and to support.

“Simona, would you like to go to India to work on the pilot project for Pulse?” asked my classmate Nikteta. I didn’t think too much, the answer was really easy: “Yes, I do”. Working on an idea that I believe is strong, innovative and revolutionary, that can make a change worldwide, with a team of people that in all the year were able to inspire me daily… “Yes” could have been the only possible answer. I called Samuel immediately, I knew he already said yes and I remember we were so excited that we were screaming at the phone for all the call. They tracked down Sanyanth the day after: the team was set up.

From that moment all the people involved started to be so happy that the only word we could say when we saw each other was: “India, really? Yes, INDIA”.

I can tell that India is a country that you have to experience for yourself. So far I picture crowds, traffic, landscapes, slums and amazing food, but I’m sure that I will be surprised every day. I always hoped to visit, but didn’t expect it to be so soon. To know that we are going to help, gives to this journey an importance that is difficult to describe. I was studying all year to understand how to make a change in developing countries, how to become a social entrepreneur and now we have the chance to finally do something!

Let the adventure begin!  Keep posted to this page for more stories, videos, photos and reflections from Sanyanth, Samuel and I.